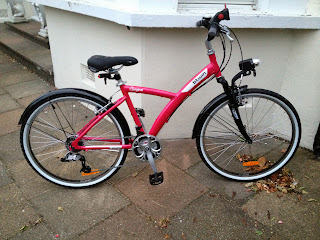 I attended a special meeting of Lewisham Cyclists with the Mayor's cycling commissioner, journalist Andrew Gilligan, on Wednesday evening. It was held at the town hall, and attended by a good 30-ish people (by my hopeless people estimating skills anyway). I'm not sure if I've mentioned on this blog before, but I've recently started commuting by bike (see my trusty steed in the picture above). The catalyst for this was a Bike Breakfast organised at work (basically free croissants and coffee for anyone who cycled in, I'm a sucker for free food.) I'd tried the route a couple of times and took it from there really. Since then I've joined the London Cycling Campaign and have to say I'm pretty addicted. I've heard Mr Gilligan talk about the Mayor's Cycling vision in general before, so I was interested to hear what he had to say about Lewisham in particular.

Lots of people have written about their thoughts on the Mayor's vision, and they're all a lot more experienced at cycling than I am, so I won't attempt to summarise my views on that. But what was said on Wednesday was of much more relevant local interest. There have been three meetings between Lewisham council and Mr Gilligan, and both sides seem to think good progress is being made (there were three councillors at the meeting that I counted - Alan Smith, Darren Johnson and Philip Peake - and the council's cycling officer, the very enthusiastic Nick Harvey).

So what was said? Well, it was confirmed that Lewisham was *not* eligible to bid for mini-Holland money as it isn't counted as outer London (and it also doesn't count as central London, so it rather falls between two stools for a lot of the cycling vision). However, there are plans to do things with cycle routes in Lewisham - most notable the dreaded Cycle Superhighway 5 and the London Cycle Network Route 22. Mr Gilligan confirmed that they do plan to bring CS5 to Lewisham (though they will be calling it CS36, as it follows the route of the 36 bus for a bit, and the New Cross bit will happen first with Lewisham as an extension), however, it won't go to the route originally planned (which I think was down Lewisham Way) as the New Cross one-way system is too tricky to sort out. Instead they hope to do something involving Sainsbury's car park and a dedicated cycling bridge, which sounds difficult and expensive to my untrained ears, so we shall see what happens there.

Work on LCN22 should be done by next year and basically seems to involve some upgraded signage and a bit of rerouting in Catford to use the Waterlink Way. We wait with bated breath! Lewisham council confirmed that Network Rail will be doing works on the railway bridge that crosses Catford Hill and that they've asked them to widen it so that more can be done with the South Circular (which has a pinch point right about there).

Also discussed was the cycle hire scheme, and it was confirmed it isn't going to come out this far (despite Boris's wafflings to the contrary at the Mayor's state of London address back in June).

As an aside, it was again mentioned that Greenwich council has so far refused to talk to Mr Gilligan, although he did say he thought they might just about have agreed to meet with him, but he said quite clearly that until they do there will be none of the £900million+ money available to deliver the Mayor's vision coming to Greenwich. He also pointed out that CS4 will be the last to be delivered because of this refusal to engage and joked that they might end up taking it to Lewisham instead if the refusals continue. Watch this space on that one...

Overall I was pretty impressed, Mr Gilligan clearly knows his stuff - he could describe cycle routes road by road, and was totally clued up on the issues and routes in Lewisham. He was also pretty good at disarming his critics, which I guess is how he's got where he has, and he was also happy to take on board people's suggestions during the meeting. However, he was also very quick to point out that most of the things that the Mayor's vision wants to deliver rely on individual boroughs to deliver them (and then we're back to the problems seen above in Greenwich).

In summary, the vision is impressive, now we wait on the delivery.

Edited to add: the Lewisham Gateway development also came up as a problem area - previously there had been nothing for safe cycling through this area, which is a known thorn in cyclists' sides. Nick Harvey, Lewisham's cycling officer, said he has looked at the plans and had North-South and East-West cycle routes added to them. This sounds positive, but it would be good to be able to look at the plans to confirm exactly what's proposed. It's also good that Lewisham council now seem to be engaging with Lewisham Cyclists.
Posted by Clare Griffiths at 7:27 pm