Since last summer I've been heavily involved with a group campaigning to stop the proposed Silvertown tunnel (or third Blackwall tunnel as it is in reality) being built. I got involved to help with a citizen science study on air pollution in the Greenwich area, aimed at highlighting the appalling levels of pollution that already exist around the area Boris proposes to wreck even further. The results of that study were shocking, and convinced me that I needed to do more to help make sure that these plans never come to fruition.

After the results of that study and public meeting highlighting the results to a big audience, we decided that we needed to go further and investigate pollution in a wider area beyond Greenwich, but one that would also be affected by increased traffic if the new tunnel were built. It's well known to transport planners that new roads generate demand for journeys that would not otherwise have been made. So we decided to expand out into Bexley, Catford, Hither Green and Lewisham. We also joined forces with Don't Dump on Deptford's Heart, a group campaigning against a Thames Tunnel worksite on Deptford Church Street's green. They wanted to look at pollution in Deptford, so the two were a perfect match really.

A disclaimer before I start properly here. I am a driver. I own a car. I even use it to drive through the Blackwall tunnel on fairly regular occasions. I freely admit to having sat in traffic jams on the southern and northern approaches wishing that the third bore of the tunnel had been built as planned years ago. But what I now know is that wish was completely wrong-headed. I didn't understand how new roads generate new traffic until I had it explained to me - and demonstrated to me with the figures that showed what happened when the second bore of the Blackwall tunnel was built. Namely that traffic doubled at peak times within a year (and to be honest that would have happened sooner but the original tunnel closed for refurbishment for a while after the new one was opened). So if the Silvertown tunnel is built, traffic is likely to double again, and all that means is sitting on congested approach roads for longer, car engine idling, spewing out toxic fumes, which you will be breathing in.

Convinced that air pollution was likely to already be a big problem in congested Catford and Lewisham, I volunteered to help put up diffusion tubes to monitor the air pollution from nitrogen dioxide in the vicinity over a period of a month in January and early February 2014. I roped Sally into helping me out (thank you!), and to put them up we were joined by fellow citizen scientist, Jenny. 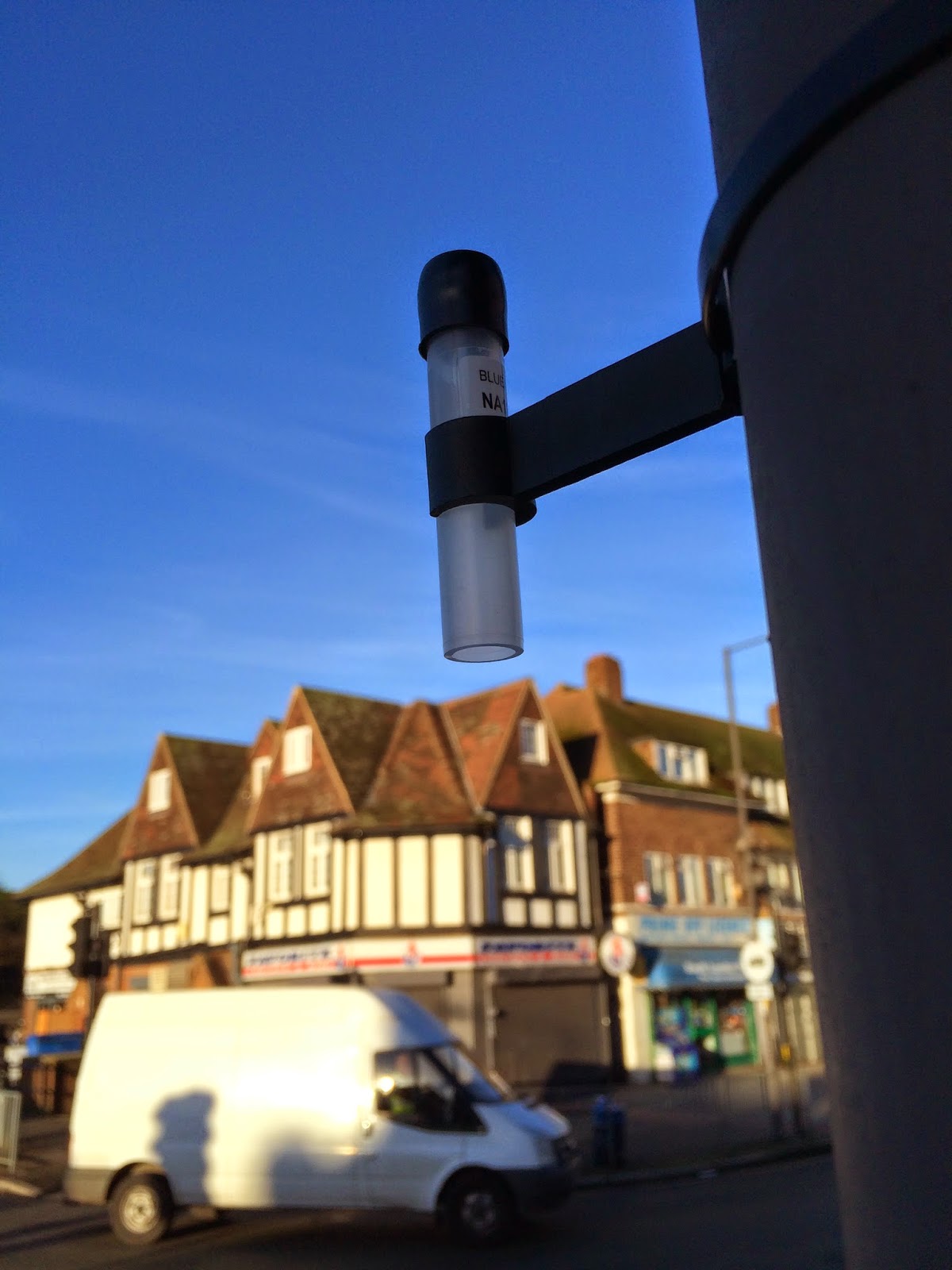 The picture shows the tube we put up at the end of Whitefoot Lane. We had a good chat with a local mum who wondered what on earth we were doing while we were putting this up, and who was keen to know more about the effects of pollution on children's developing lungs (another reason by the way that I decided I needed to get involved in this, having two children aged 5 and 7 myself).

We also put up tubes in central Catford: 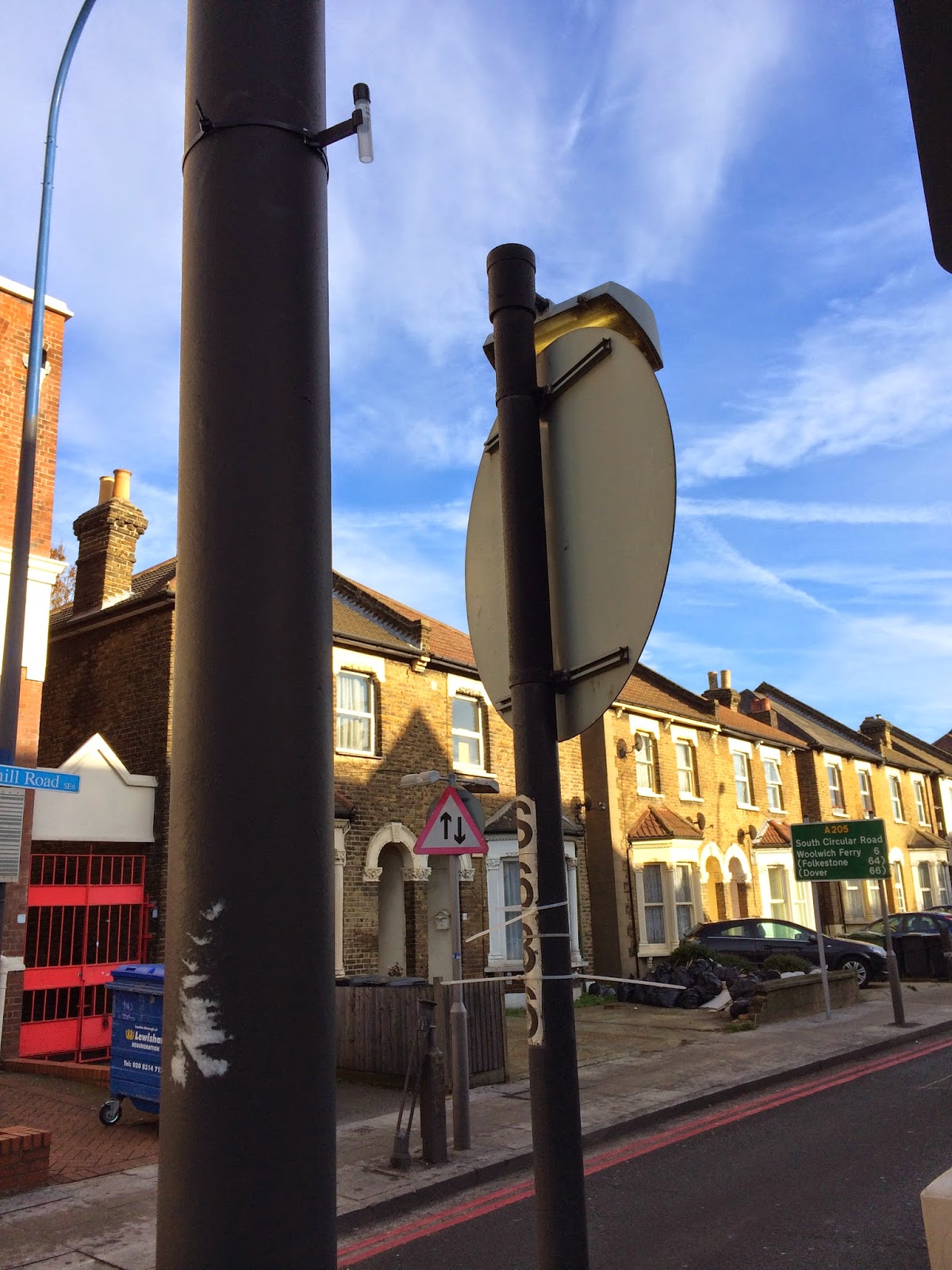 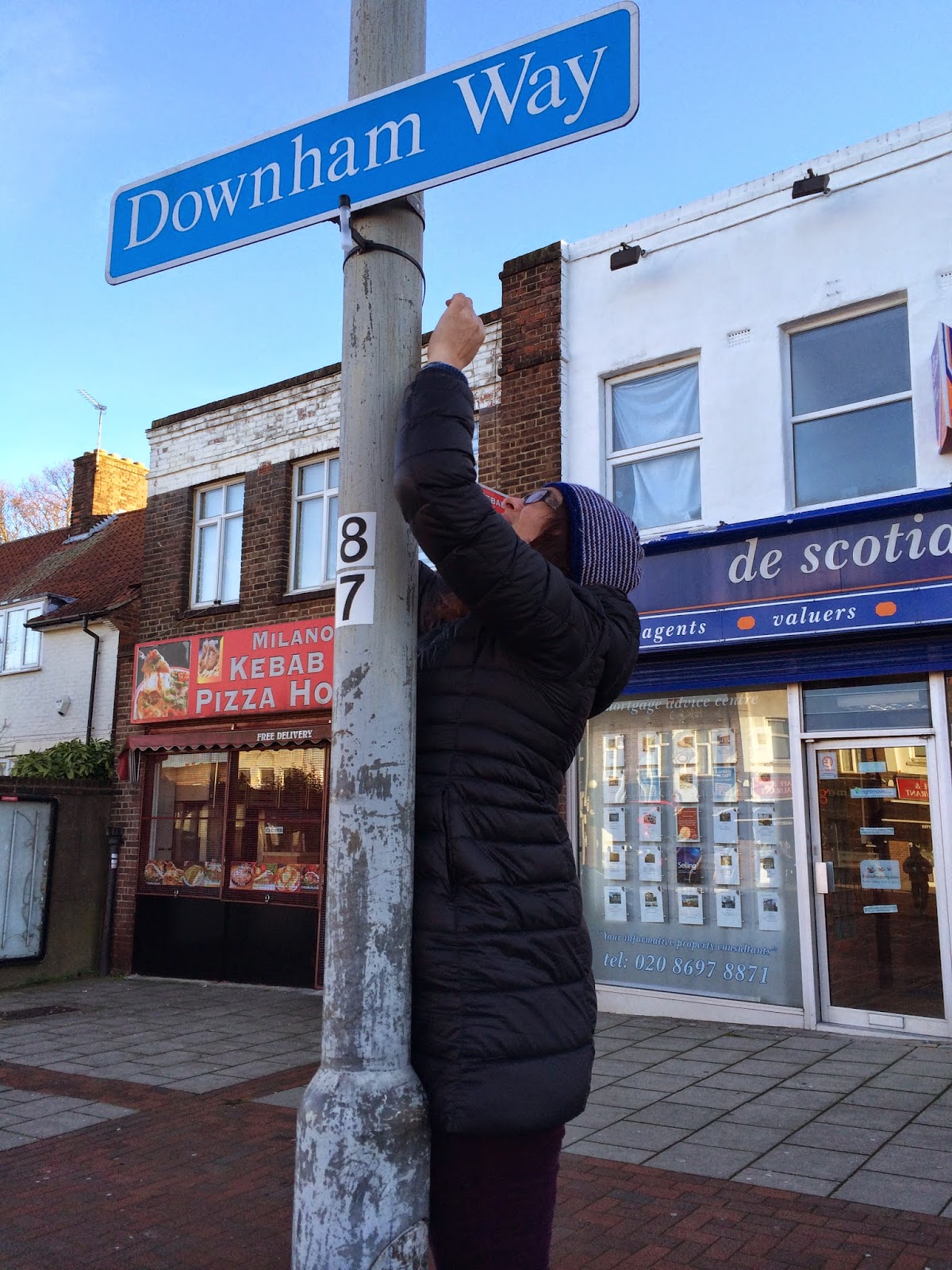 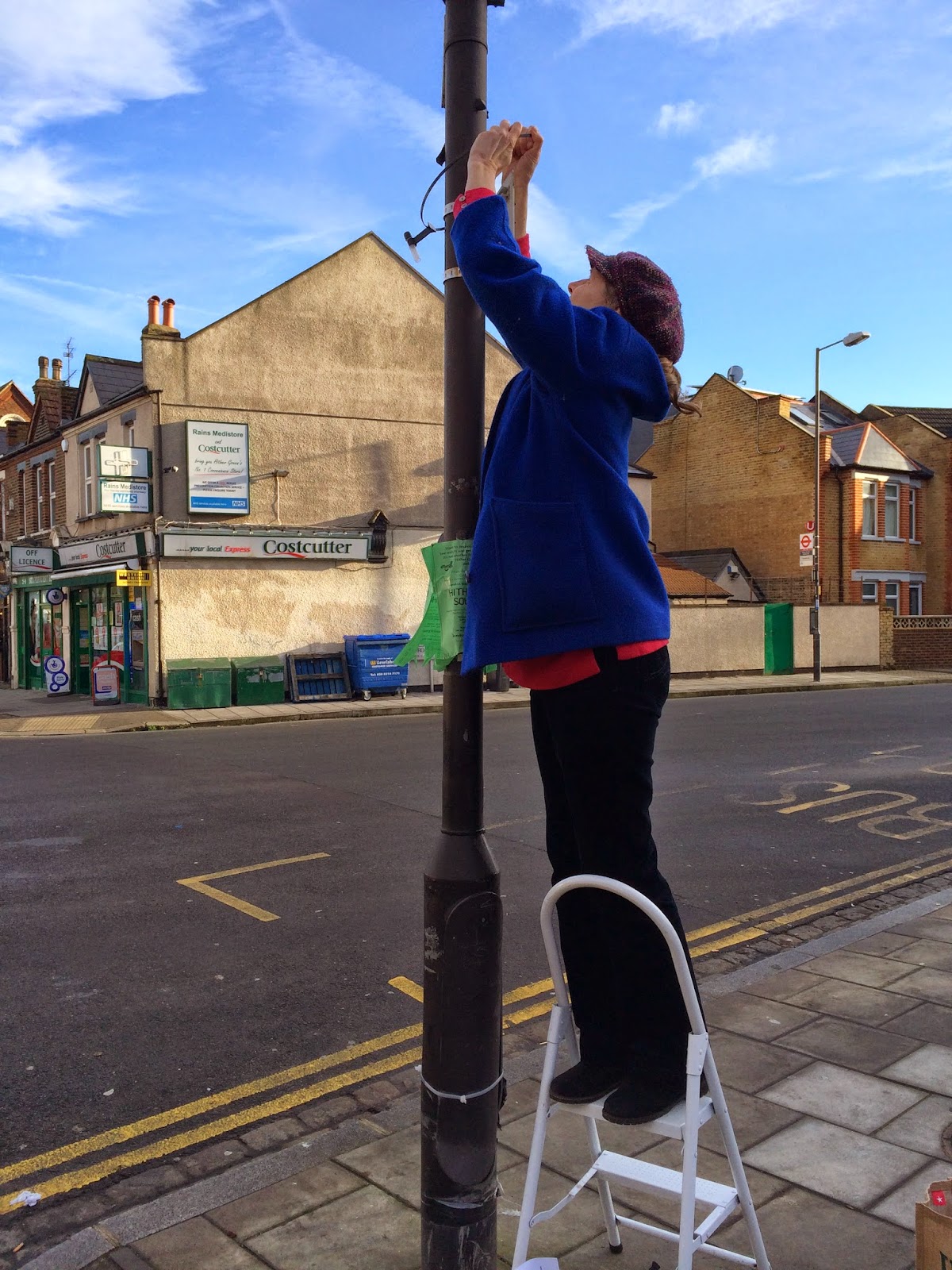 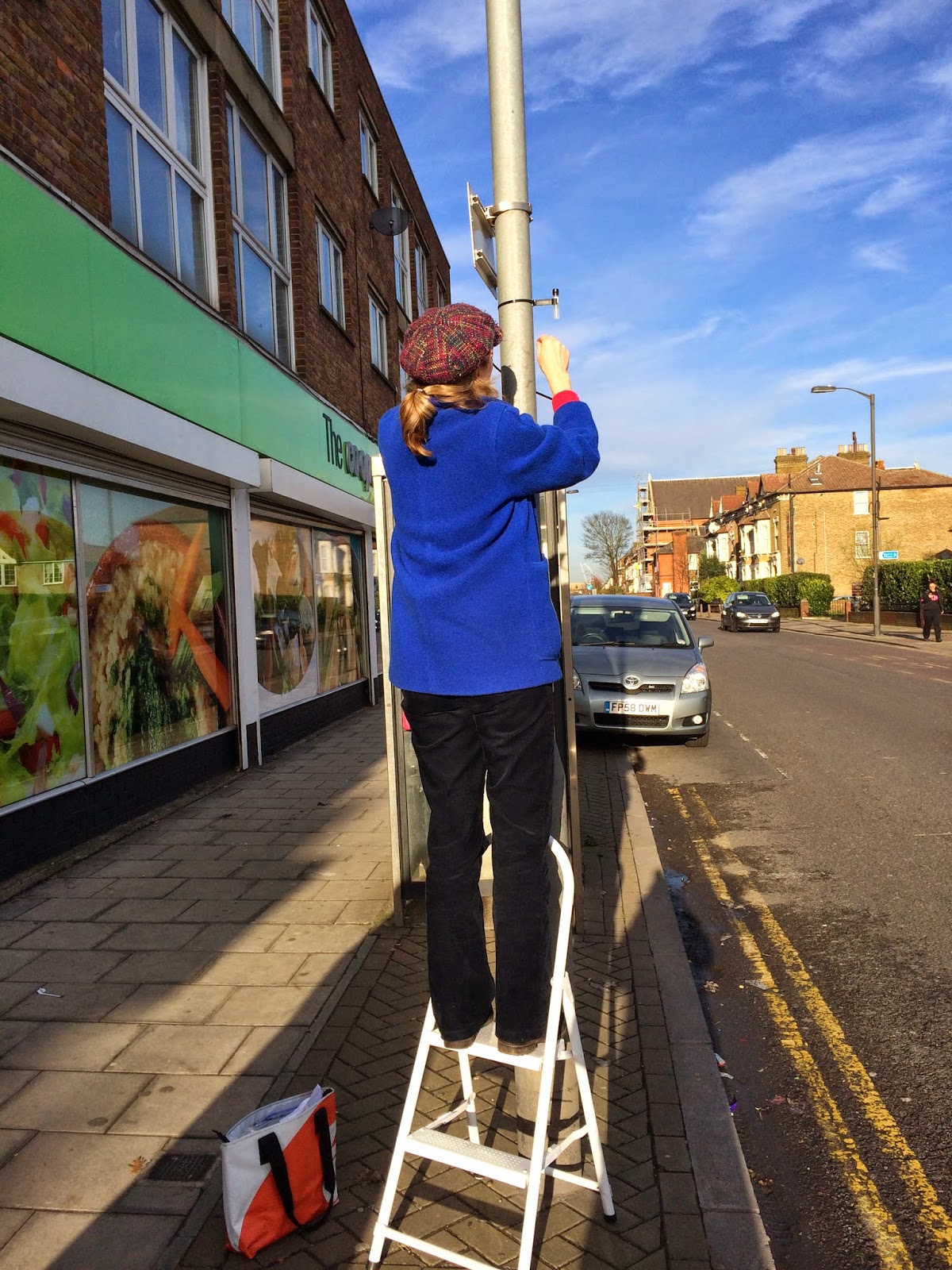 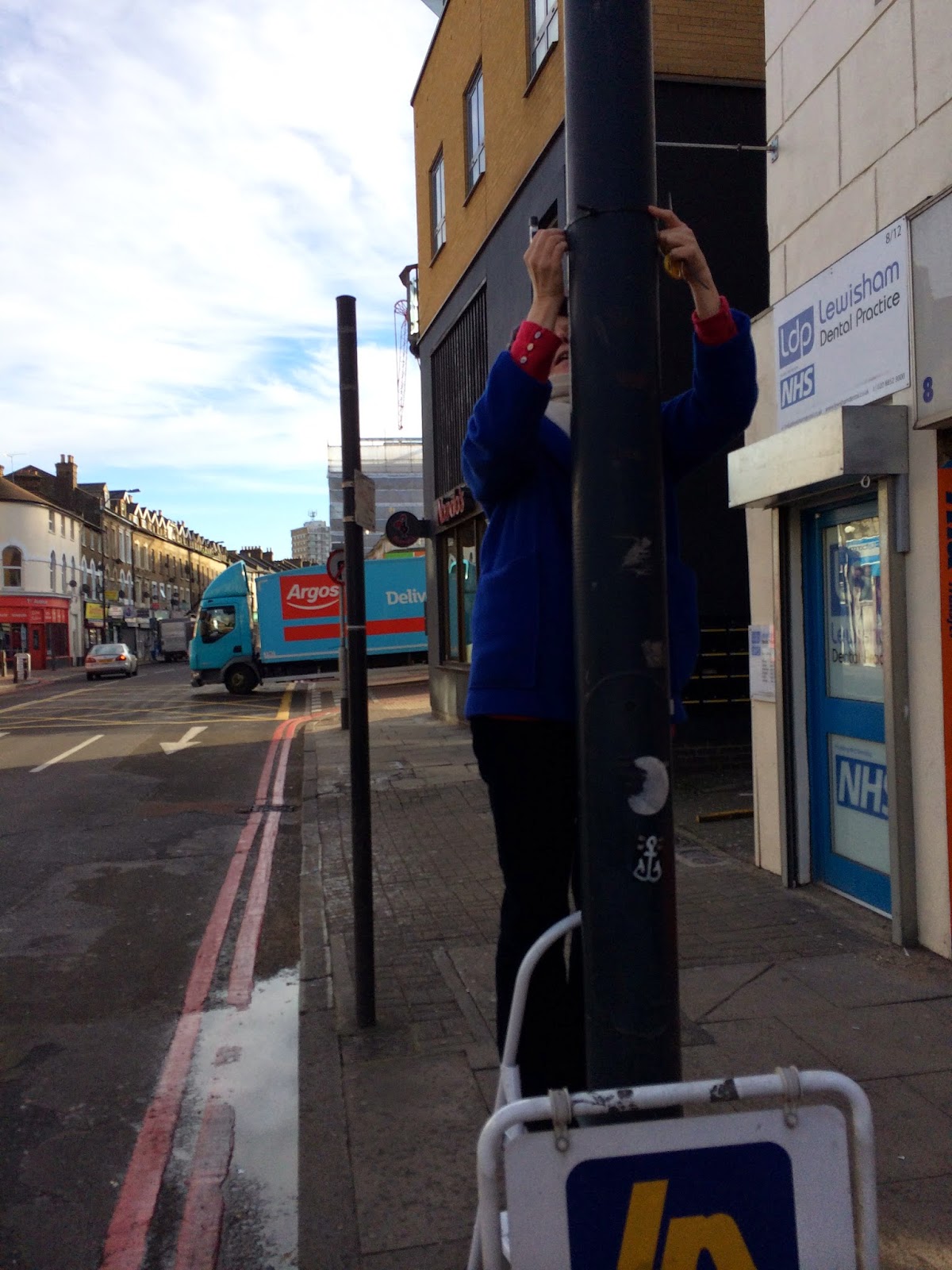 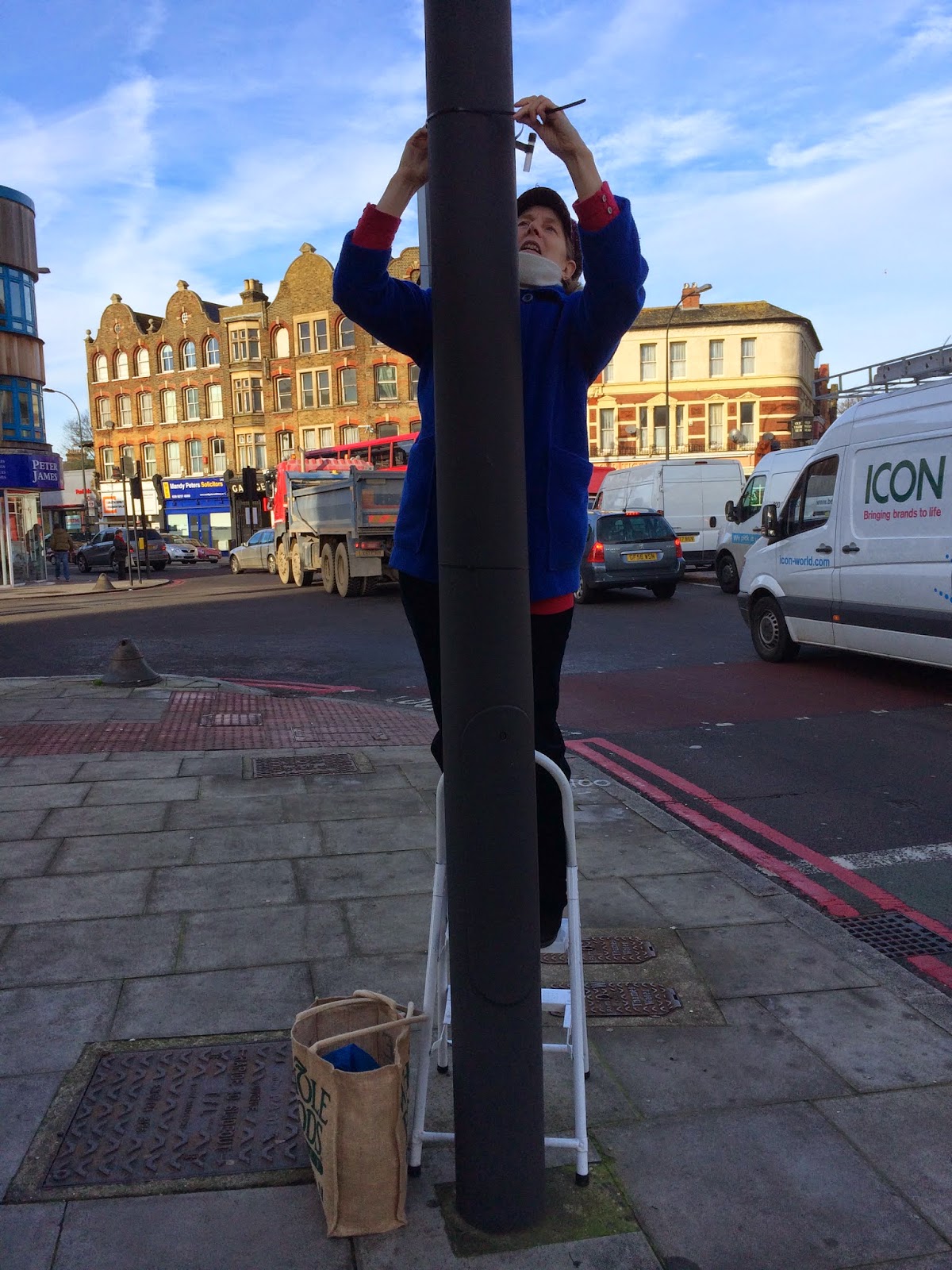 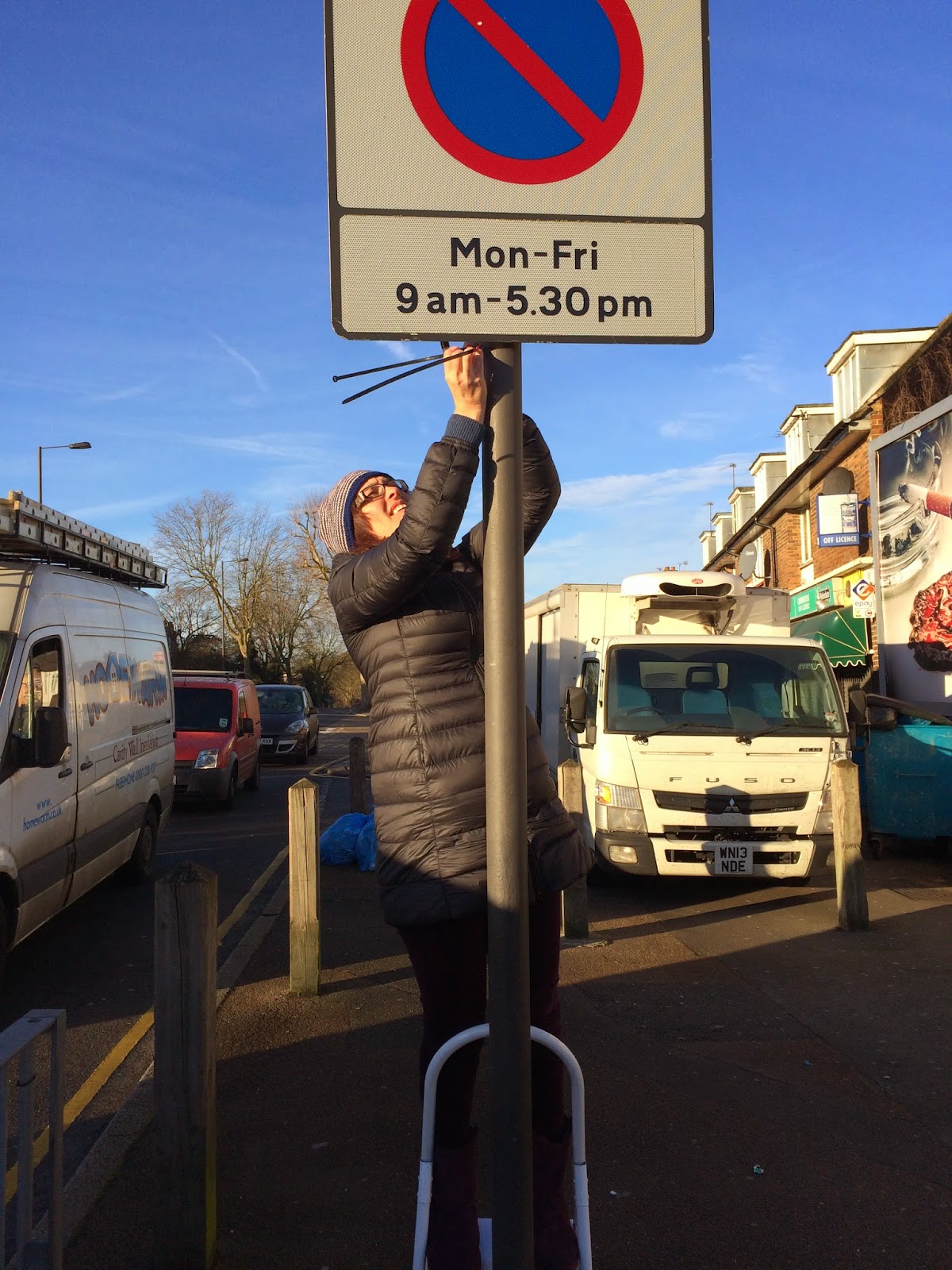 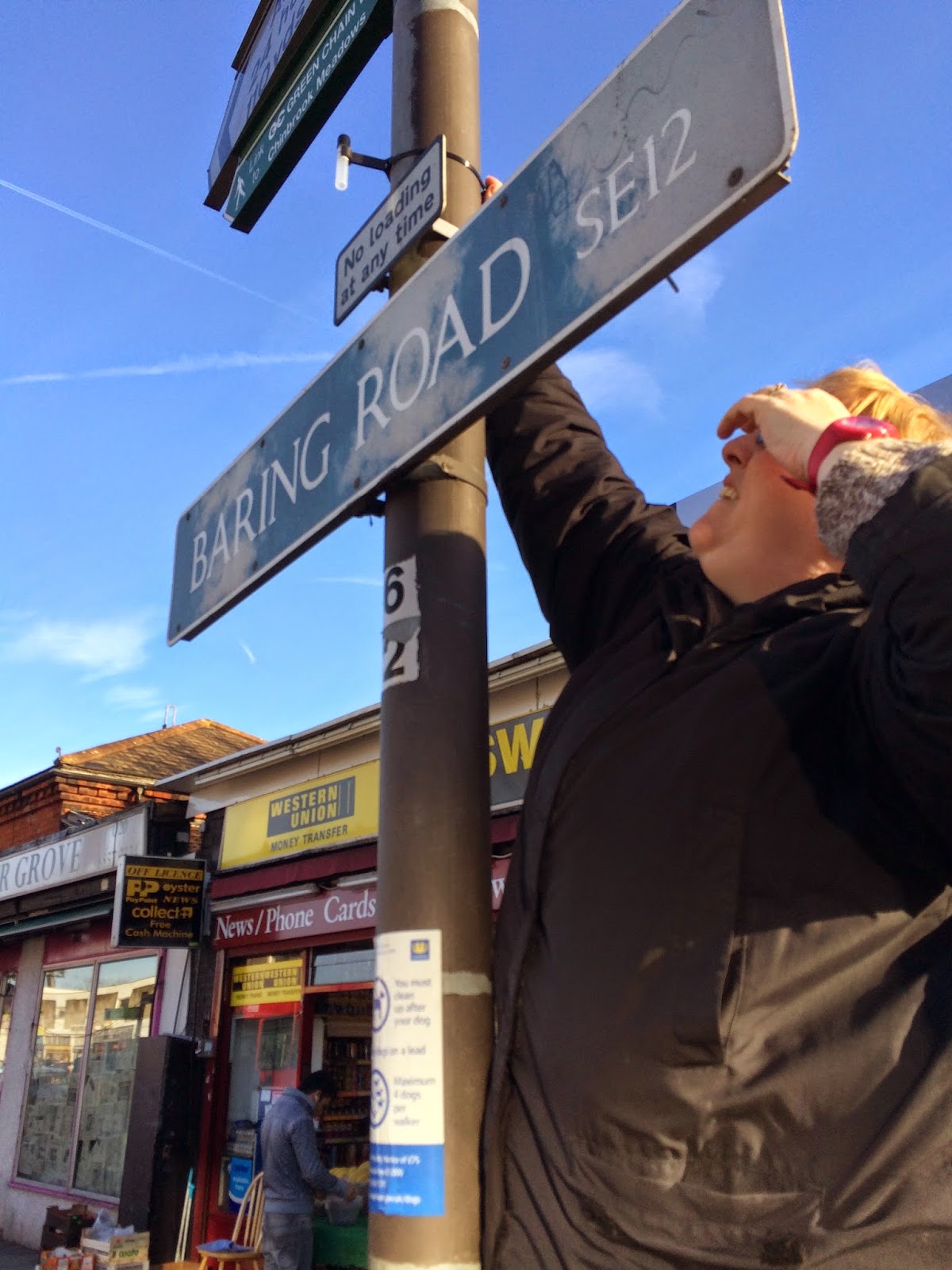 and on the South Circular, at the junction of Verdant Lane, Hither Green Lane and Brownhill Road: 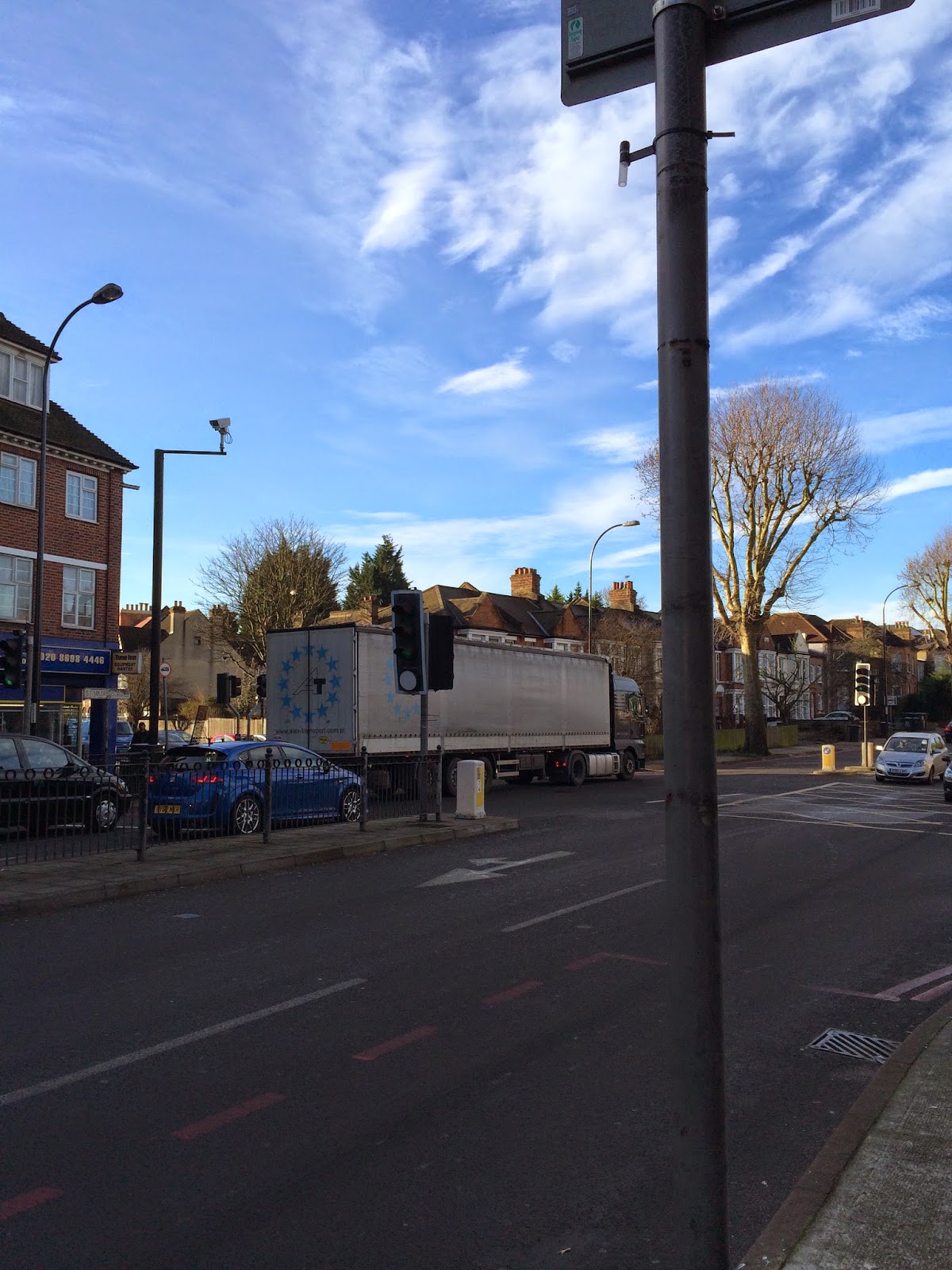 The results are absolutely horrifying. Bear in mind that this January just gone was one of the wettest on record, which tends to lower nitrogen dioxide pollution levels, the map below shows pollution levels in the centre of Lewisham, just outside a well-known chicken-selling emporium of 109 microgrammes per cubic metre. The EU legal annual limit is 40 microgrammes per cubic metre, so this is over 2.5 times the EU limit! Right where people are shopping, eating out, and live. 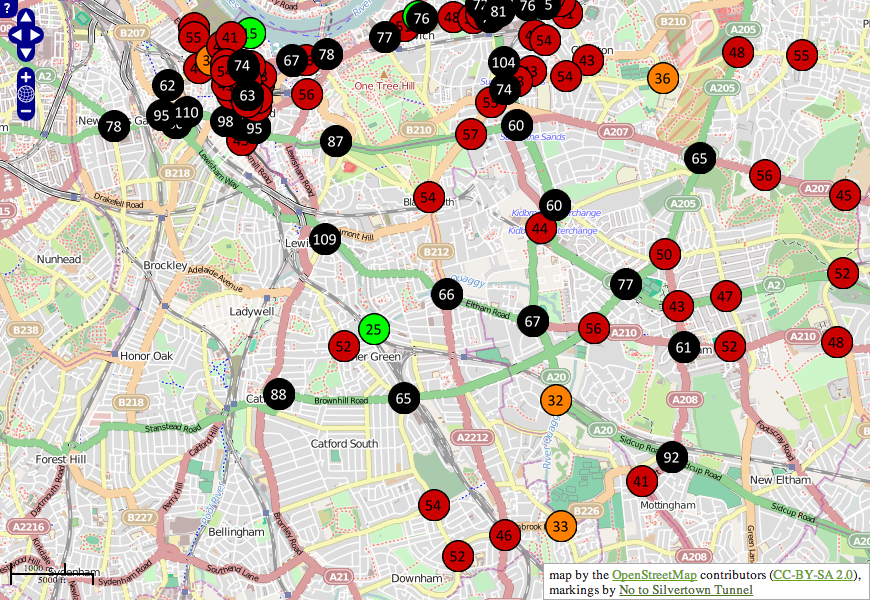 On Hither Green Lane pollution levels reached 52 microgrammes per cubic metre, despite the stretch of road we put the diffusion tube up on being closed for almost two of the four weeks the tube was up!

The only places that recorded levels below the EU limit, of the tubes Sally, Jenny and I put up, were the other side of Grove Park station, by Marvels Lane health centre, where the level was 33 microgrammes per cubic metre, a level still considered harmful to health, and Fernbrook Road on the other side of Hither Green station from Hither Green Lane, which sees next to no traffic apart from the 273 bus and could perhaps be considered a control for the level of pollution we might expect in our area in the absence of car traffic.

I was shocked to see these results. My children are growing up in an area that is dangerously polluted, and I am not going to sit by and do nothing as Boris Johnson, TfL and Greenwich Council strive to make it worse! I will keep on campaigning until the idea of building more roads in South East London is so ridiculous it won't be allowed to happen.

If you can help at all with the No to Silvertown Tunnel campaign, then do get in touch, either through the campaign's website, or through my blog in the comments below.

Others have written their own accounts of the work we did in January and February:

Thank you to Andrew Wood of Network for Clean Air for providing advice and support to carry out the study, the directors of The Scale Factory for financial support to enable the work in Catford and surrounds to be done, and of course all the other volunteers who helped (listed on the No to Silvertown Tunnel website)!


Posted by Clare Griffiths at 9:22 pm