The General Election in Lewisham East 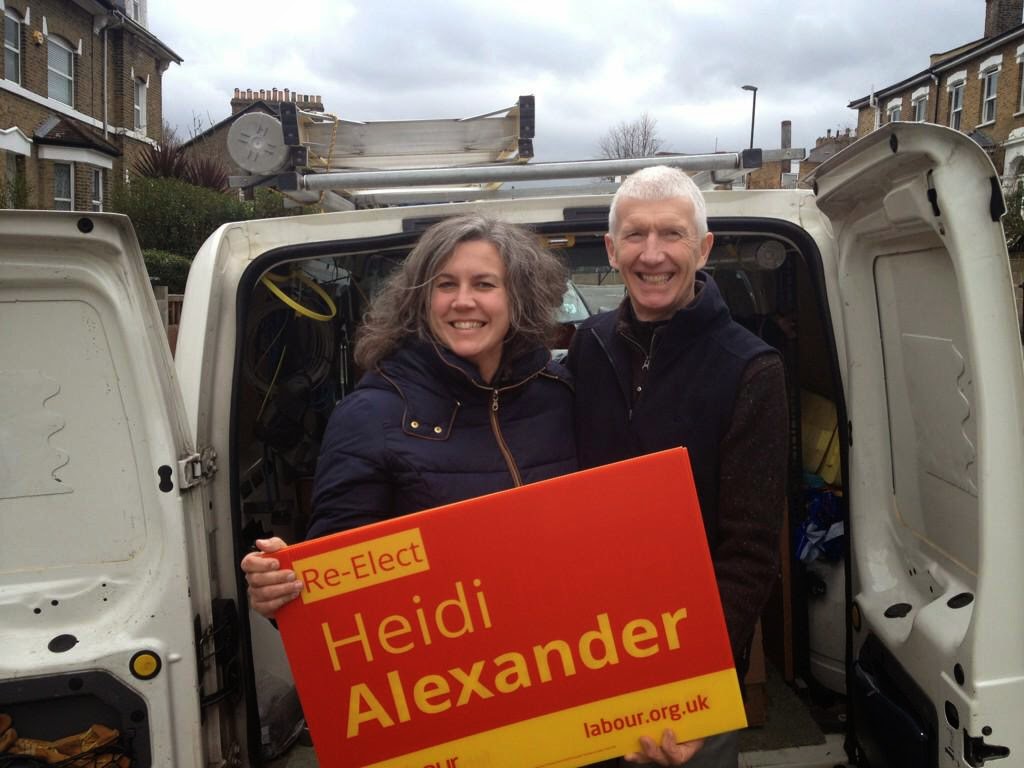 It won't have escaped your attention that there's a general election coming. Unless of course you live under a rock. I live in the Lewisham East constituency so that's the one I'm going to write about here. You'll have to look elsewhere for your Lewisham Deptford and Lewisham West and Penge cutting edge analysis I'm afraid.

What do we know about Lewisham East? Well, it's formed of the council wards of Blackheath, Lee Green, Grove Park, Rushey Green, Catford South, Whitefoot and Downham. These wards returned 21 Labour councillors at the last local elections.

Historically the seat was Conservative from 1983-1992, when it was held by former Sports Minister Colin Moynihan (a name that might be familiar to the real politics geeks amongst you.) Interestingly, the Conservative victory in 1983 was largely as a result of Labour losing votes to the SDP, whose candidate was Polly Toynbee. In 1992 it was won by Bridget Prentice and when she stepped down in 2010, Heidi Alexander took the seat. Heidi had previously been a councillor in Deptford, and, fact fans, is 40 during this election campaign, being only a couple of months younger than me.

I had a look back through the election results from 1992 to 2010 using the amazing Political Science Resources website by Richard Kimber, to produce a couple of charts with some interesting info about previous results. Did you know, for example, that only four parties contested the seat in 1992 - Labour, Conservative, Lib Dem and the Natural Law Party. In case you've forgotten the Natural Law Party here's one of their party political broadcasts to remind you:

Genius. Who could forget yogic flying?

And did you know that one James Cleverly, London Assembly member for Bexley and Bromley, contested the seat in 2005, gaining 7,512 votes for the Conservatives?

Here's a chart of the historical results. I've included "did not vote" as a category. 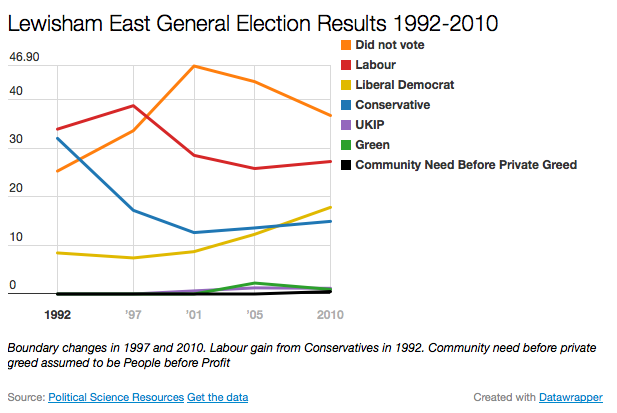 I think it's pretty clear who's going to win in 2015, unless all those Did Not Votes decide to do something very different. The only sign that there's a general election on when you pootle about the constituency is the proliferation of these signs in people's front gardens... 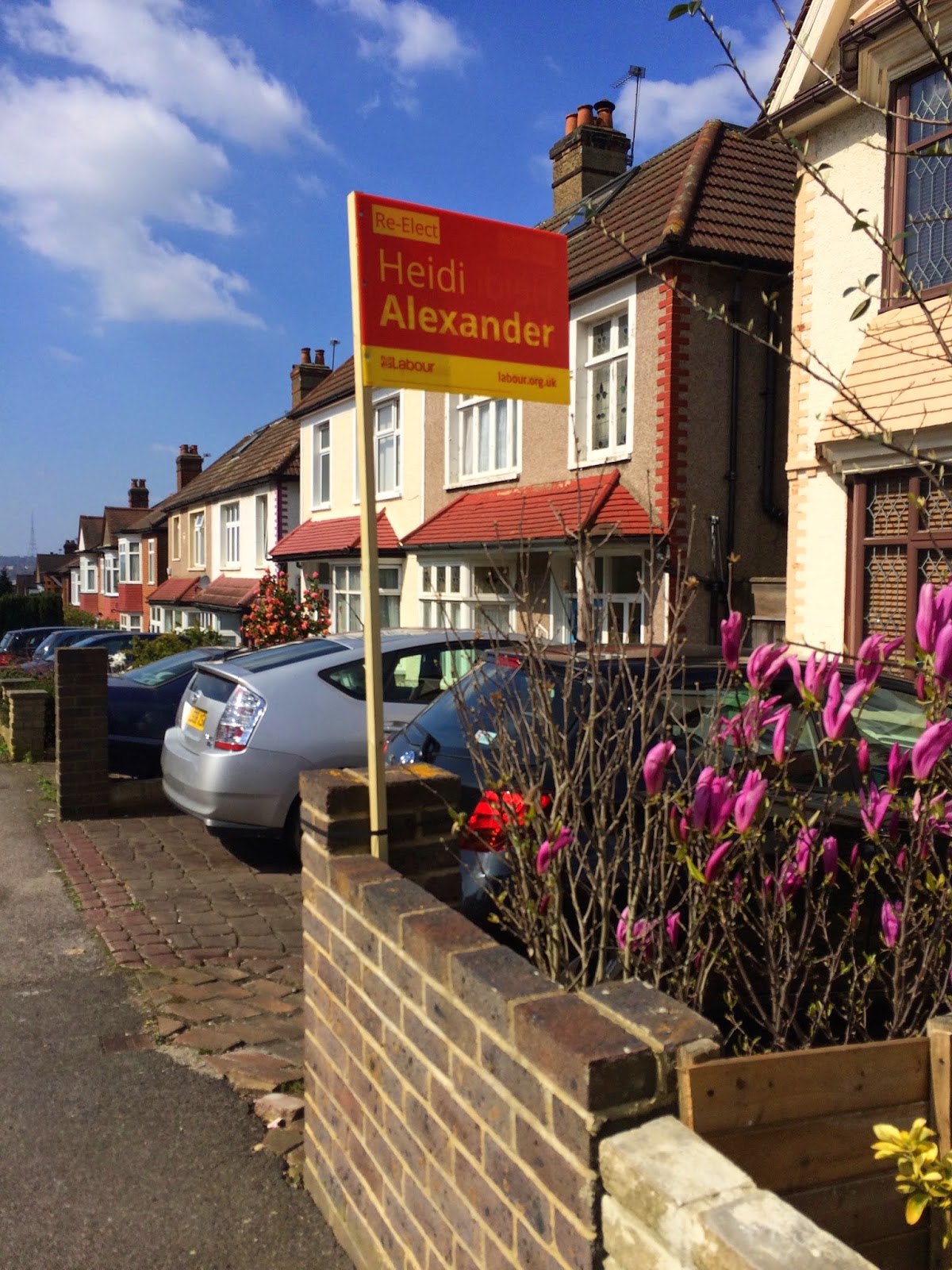 What's of interest, apart from taking bets on the size of Heidi's majority, is who is going to come second. I think we can expect the Lib Dem vote to collapse, as seen in the council elections when their vote share plummeted from 27% in 2010 to 9%. They got a 28% share in the general election in 2010 if you exclude the DNVs from the equation. 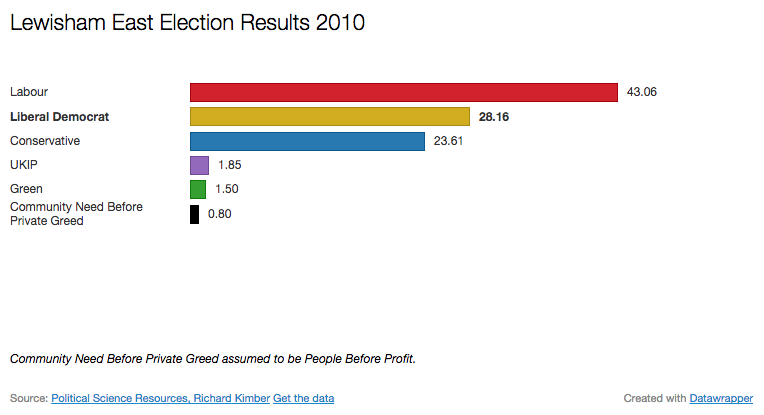 The chart above shows the 2010 election results, including only the parties expected to contest in 2015. I've left off the English Democrats as they only got 426 votes in 2010 and don't appear to be standing a candidate in 2015, thankfully.

The Conservative candidate is a Bromley councillor, Peter Fortune. I guess he might fancy his chances of coming second given past form and what's happened to the Lib Dems. However, this leaflet seems wildly optimistic. 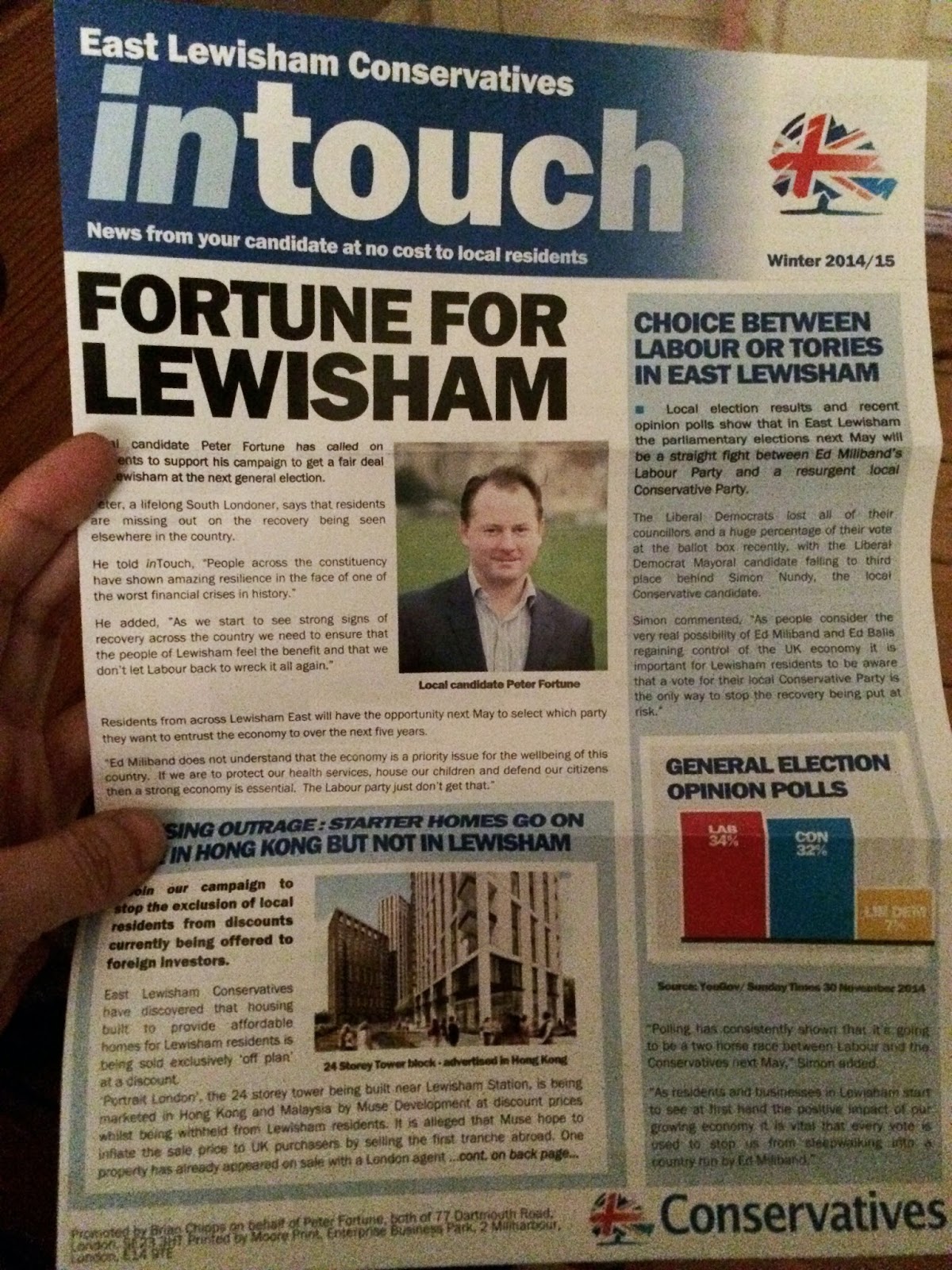 They can't even get the name of the constituency right.

I've had no election literature from the Lib Dem candidate Julia Fletcher, until last year a councillor in Downham, or from the Green candidate Störm Poorun. I'm promised something in a couple of weeks from the Greens...

@lewgreenparty @clogsilk Hi Claire, my website has been updated, should be live later today! I'll send it out here :) Plus 2 leaflets coming
— Störm Poorun (@stormpoorun) April 8, 2015


We'll gloss over the complete inability to spell my name.

The Greens got 16% of the vote in the 2014 council elections, and were the second party, so you'd think they might fancy their chances at second place in this general election. But in 2010 they polled 11% in the local elections, coming third behind Labour and the Lib Dems, but managed only 1.5% in the vote for MP. So it's pretty clear that local results aren't a huge guide to what might happen nationally.

It's been suggested to me that Lewisham East is on a list of constituencies where UKIP might come second. I couldn't find evidence of that on googling but if anyone wants to point me to it I'd be interested to see where the idea has come from. They polled less than 2% in the last general election here. They did poll fairly high numbers in the council elections last year in Whitefoot, Downham and Grove Park, to the south and east of the constituency where you might expect them to do well, but even there their vote share is nowhere near sufficient to see a leap in voters of the magnitude you'd need to put them second. The UKIP candidate is Anne Marie Waters, founder of Sharia Watch (nb she is listed as Anna Maria Waters in the nomination papers).

Taking the top six parties and including only the highest scoring person from each party at the council elections last year in the wards that make up Lewisham East, you get a vote share that looks like the above chart. This sees UKIP coming last, with a share of 8%. It wouldn't surprise me too much if this isn't pretty much the order of the parties come May 7th, although I'd expect the Tories to score somewhat higher than this.

People before Profit did quite well in the council elections in some of the wards in Lewisham East, and their candidate Nick Long seems keen and willing to answer questions (more than can be said for some of the other candidates) but if we're honest, this is a bit outside their main stamping ground of Deptford, Telegraph Hill and New Cross.

So there you have it. The state of play in Lewisham East. I'm expecting a stonking victory for Heidi Alexander, with the Tories in second. The Lib Dems will collapse and I think People before Profit and the Greens will increase their vote share from 2010 significantly. I hope we see nothing of UKIP.

Update 9 April 17:30: The Christian People's Alliance are also standing a candidate (the link is to Lewisham Deptford candidate Malcolm Martin, they don't have a page for the Lewisham East candidate, Maureen Martin), and the UKIP candidate is listed as Anna Maria Waters, not Anne Marie Waters, but I'm 99.9% certain it's the same person. Full list of candidates here.

Update 10 April 11:15: You can see what YouGov are predicting for Lewisham East based on a whole range of factors (not local opinion polls....) here.

Update 24 April 20:30: corrected an error in the 2010 election results that had transposed the Conservative and Lib Dem vote. Oops! Still think the Tories will come second in 2015 though.

Posted by Clare Griffiths at 9:11 pm