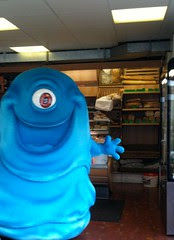 Bob the blob in Jesshops
Originally uploaded by clogsilk.
This sight greeted us as we headed out for lunch from work on Wednesday. Bob the Blob in our local bakery in Exmouth Market. We never did get to the bottom of why!

Way back in 1997/98 the Government was all about neighbourhoods. That was how our cities were going to be transformed, by small groups of people coming together and improving their local areas. Sure Start was based on neighbourhoods, and the fledgling Neighbourhood Statistics Service was set up by the Office for National Statistics. Then someone realised that to come up with statistics for areas, they need to have boundaries. And that if you want to make sure that any data you release for these small areas don't disclose the identity of individuals then these boundaries need to align with pre-existing areas that you've already published data for. And of course, you probably need to know the number of people living in your neighbourhood to do anything meaningful with the fact that there were 53 births in the area last year...

And lo, neighbourhoods became wards and all was fine and dandy. Except that wards are a political construct, and they change in order to keep electoral numbers to a reasonable level in each. Quite often your ward bears little relation to where you feel you live. But of course data and feelings don't really go hand in hand. I used to live in Lee. When we moved there we were in St Mildred's ward. This had no impact on my life if I'm honest. I had no real idea who St Mildred was, or why her name was on my ward. But then there was a reorganisation and we came under Lee Green ward. Now here was an area I could identify with. Particularly when the good voters of Lee Green ousted its Labour councillors and appointed a team of hard working Lib Dems in their place. People who live in Lee Green and care a great deal about it.

We then moved. To the Corbett Estate on the other side of Hither Green station. Technically Catford according to the Post Office, though it was considered to be in Hither Green at the time it was built, and in Catford South ward. I can't say I feel any attachment to Catford South. Hither Green is my nearest station and these days I mostly travel to work from there (Catford traffic makes that option a nightmare - it can take an hour to get to Catford station at the moment, a journey of just over a mile). When I was off on maternity leave, and on the days I do childcare, I spent most of my time at community centres which happen to come under Whitefoot ward. Catford South itself has very little going on for babies and toddlers that isn't run by religious groups with huge waiting lists to join. Or I spent time in Hither Green and Lee's parks. There are no parks in Catford South itself.

What prompted me to think about this was a leaflet I got through the door inviting me to the Catford South local assembly. The local assemblies are a great idea and give people a chance to input into what's going on in their neighbourhood (that word again). Unfortunately for me, I have far more of a personal stake in what's going on in Hither Green (Lewisham Central ward) or Lee (Lee Green ward). And what happens to the facilities I use in Whitefoot ward. The projects and initiatives for Catford South just don't relate to me at all.

It's a shame that neighbourhoods ended up drifting back to being wards, a real opportunity to get people doing something different at local level has been lost. On the other hand, if no one could measure the impact of any initiatives that were put in place, would they really be worth doing?
Posted by Clare Griffiths at 9:42 pm 4 comments:

A review of the Catford South/Whitefoot North 20 mph zone

I received this questionnaire from Lewisham council asking for my views on the 20 mph zone covering the conservation area, Corbett Estate and North Downham estates (though oddly not the prefab estate, not sure why). The zone was set up in "Spring 2007".

The first thing they do is to look at the impact of the zone in terms of accidents and casualties. A laudable aim. However, some of the data are not what I would consider fit for purpose. First things first, they claim to analyse two periods of 30 months, before and after introduction of the zone. A reasonable approach for a first pass at looking at the impact of the zone. Unfortunately, if my calculations are correct, that means that the "before" period includes 3 winters (2004/5, 2005/6 and 2006/7) and the "after" period includes 2 (2007/8 and 2008/9). Since accidents are strongly seasonal, this gives a false picture, making it very likely that numbers would be higher in the first period.

Secondly, they present two tables, one of accidents and one of casualties, which split injuries into "fatal", "serious" and "slight". There was 1 fatal accident, giving rise to 1 death, in the period before the introduction of the zone and no fatal accidents/casualties in the period after the zone was introduced. Presented in the table as a 100% reduction. Well, yes, but what is more likely is that fatal accidents in the zone are so rare as to be pretty much random. A good thing, of course, but nothing to do with the zone itself. When we look at serious injuries, there were 10 before and 3 after, a 70% reduction, but again based on tiny numbers and without taking into account possible seasonality. I'm not very convinced about using these figures for a before and after analysis either. The number of slight accidents/casualties is greater, and shows a similar percentage reduction. Again, not taking into account possible seasonality.

They then go on to extrapolate savings to the community based on some method of allocating a cost of each category of casualty. They estimate a saving of £3.5 million. Unfortunately, the leaflet doesn't see fit to tell us how this was done. Clearly it has more validity if based largely on the more robust figures (i.e. those with larger numbers). I would be very sceptical if this applied any significant amount of money to the one death before (though I suspect that it does). I would be very interested in the details of the method.

What is probably more robust, and in my mind should probably be the focus of the leaflet is the measurements of traffic speeds. According to the leaflet, these have reduced in all but three roads and the average speeds range between 14 and 27 mph. However, this paragraph fails to tell us what the average speeds were beforehand, so only a cautious welcome there. There is also no explanation of the average speeds of 27 mph, though one would hope they are on the 30 mph roads that border the zone.

I have filled in my views on the relevant sheet and returned it to the council. Their analysis is clearly well intended - it makes a change for analysis to be done at all to look at the impact of policies. It's just unfortunate that it wasn't done better.
Posted by Clare Griffiths at 8:26 pm No comments: 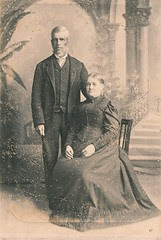 David & Sarah Lancaster
Originally uploaded by maureenswift.
My mum has been going through lots of old photos she's collected over the years and scanning them in. This one is of my great great grandparents, David and Sarah Lancaster. David was born in 1844. I'm not sure how old they are in this picture - the austere dress makes them look older than they probably are.

They lived in Gamlingay, a village in Cambridgeshire, situated between St Neots and Biggleswade. Its current population is around 3,500. Wikipedia has a wealth of information, including the gem that by the year of 1844 there were 5 inns in Gamlingay. They moved to Eaton Socon some time before my great grandad was born, so could well have been living there when this picture was taken. They had a baker's shop in St Neots.
Posted by Clare Griffiths at 7:45 pm 1 comment: