Tonight Lewisham council voted in favour of granting authority to proceed with judicial review proceedings to ask the court to quash the recommendations of the Trust Special Administrator of South London Healthcare Trust's report of 8 January (which recommended the downgrading of A&E at Lewisham hospital and the closure of its obstetric maternity services).

This follows the pre-action notice issued by the council earlier this month after Jeremy Hunt, Secretary of State for Health, agreed to proceed with the recommendations as set out by the TSA. The pre-action notice stated the council's belief that to include Lewisham hospital in the TSA remit goes beyond what the law permits. The Secretary of State's response was that he did not agree with this view. However, Lewisham's lawyers believe the council have a strong case and it is worth proceeding with it.

The vote came at a full council meeting which also discussed the budget for 2013-14 and recommended a 1.75% rise in council tax and accompanying budget cuts to meet the required savings of £21.3million based on the budget given to the council from central government.

Edited 5 March to update the council tax rise figure to 1.75% and not 1.5% as I originally heard.
Posted by Clare Griffiths at 10:45 pm No comments:

Lewisham Council has today published a further options paper as part of the Catford Town Centre Local Area Plan. This is a planning strategy document which sets out what developments should happen in Catford over the next 10 years. The plan will be used to assess planning applications for development sites within the town centre. It's a detailed document so obviously will merit a more detailed look before passing comment.

The council are consulting on the plans and anyone can comment. Copies of the document are available in the following places:
● the Council's website
● all borough libraries and the Council’s AccessPoint, which is on the Ground Floor of Laurence House.
● by contacting the Planning Policy Team on 020 8314 7400

Comments on the plan need to be sent to the council in writing:
● Online
● By email to planning.policy@lewisham.gov.uk making sure that ‘Catford Local Plan Further Options 2013’ is the subject of the mail
● By post to Planning Policy, London Borough of Lewisham, 3rd Floor, Laurence House, 1 Catford
Road, SE6 4RU

You can also attend a consultation event and fill in a questionnaire at one of these - at the moment they are the Catford South Local Assembly on 28 February at Conisborough College and at Catford Broadway Market on 3 March.


The questions the Council are asking (taken from their website) include:


There is also a detailed traffic modelling summary, which proposes changes to how traffic is managed in the centre of Catford, where the A205 and A21 cross. It's complex to understand and will take a bit of reading and digesting.

The consultation period ends at 5pm on Friday 5 April 2013. The final version of the Catford plan will need to be approved by the government, after which it can be formally adopted by the Council.

Posted by Clare Griffiths at 4:07 pm No comments:

Yesterday the Guardian datablog published maps of child poverty data based on a report by the End Child Poverty Campaign. The campaign produced the data themselves and used the closest possible measure to that used nationally by the government (which is based on the percentage of children living in households earning below 60% of median income before housing costs). The figures presented are for mid 2012, although they've been calculated by applying national trends to local data from 2010, so are an estimate. (Interestingly the campaign say they don't have a local measure using the government's official definition, but this is published in the Public Health Outcomes Framework and on Local Health, both official statistics websites.)

The Guardian chose to present the data for Parliamentary Constituencies, presumably to link the numbers to a recognisable public face for each area, but the figures are available at ward level and reveal wide disparities within areas.

Just over 20% of children are living in poverty across the UK as a whole, and in London the figures range from 7% in Richmond-upon-Thames to 42% in Tower Hamlets and because housing is so expensive in London, if after housing costs figures were used, then these results would be much worse.

I decided to look at the ward-level data for Lewisham and Greenwich. The local authority figures are both 24%, just slightly above the national average figure. However, as soon as you break this down by looking at wards within local authorities a picture of big inequalities emerges. In Greenwich, Eltham North and Blackheath Westcombe have only 6 and 7% of children respectively living in poverty. The lowest figures in Lewisham are for Lee Green (14%) and Crofton Park (15%). And at the other end of the spectrum, Evelyn ward in Deptford has a staggering 37% of children living in poverty. The next nearest three wards each have 30%. Only Woolwich Riverside and Woolwich Common have figures above 30% in Greenwich borough (33 and 32% respectively).

Shockingly, if you take a look at where the best performing schools in Lewisham are located, it doesn't take a genius to work out where they might be... Brindishe Lee and Lee Manor schools both had 93% of their pupils achieving level 4 or above in English and Maths in the latest year for which data are available. Compare that with 71% at Deptford Park. And education isn't the only area that's affected by poverty, although it's certainly the one that is likely to impact most on likely future earning potential.

These figures should make anyone sit up and take notice and are also a reminder of what inequalities sit below the surface of figures presented at borough level.


Posted by Clare Griffiths at 6:14 pm No comments: 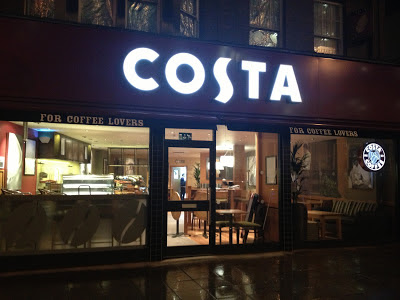 Well, well, well. I started this blog in 2006, but recently hived off all the personal stuff into a different place to keep this one for more local issues as well as things that take my interest but that aren't so personal. This means that the first post that now appears here is this one from 2007, bemoaning the fact that Stratford had gained a Starbucks and Catford most certainly hadn't.

Fast forward almost six years and here we are in 2013. The Olympics have been and gone and Stratford is well and truly on the up. As for Catford, well, no sign of a Starbucks as yet, although with their reputation being pretty much rock bottom over their tax affairs at the moment maybe that's no bad thing.

However, just last week Catford gained a Costa Coffee. It's next to Sapporo on the Broadway and looks pretty big from the outside. I think it's actually open now too, which it wasn't when I took this photo. As far as I know Costa pay their taxes, so maybe this isn't a bad thing. On the other hand there are already quite a few independent coffee shops on the Broadway and I wonder how this will affect them? I guess if it attracts new people to shop in Catford it's not a bad thing. I wait with interest to see what happens next.
Posted by Clare Griffiths at 8:16 pm No comments: