London's newest tourist attraction/public transport facility* (*delete as you feel appropriate) opened to the public on Thursday, so I decided to pop along to have a little look for myself. I don't like heights, but thought I'd face up to my fears and give it a go. I'd thought it might be busy by the time I got there, being the opening day and all that, and there was indeed a queue at the ticket windows, albeit a short one, which I joined for a while, until a handy chap told me I could just walk on with my Oyster card. He was right (of course) - there are ticket barriers as there would be at any tube station, this being public transport and all that, so I was able to swipe my Oyster card and get on. 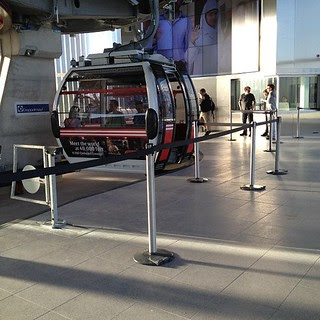 This is what greets you once inside the terminal (this is actually the Royal Docks side but they look the same). As it was so quiet I was able to get a gondola to myself in both directions, which didn't really help with the fear aspect. I busied myself taking photos and live tweeting my journey to distract me from the height (it's really very high!) and wind (it was pretty blustery while I was up there which didn't do much for my nerves).

There are some lovely views to be seen if you can keep your eyes open - I particularly liked this one of the dome and Canary wharf's skyscrapers with the sun starting to set off to one side. 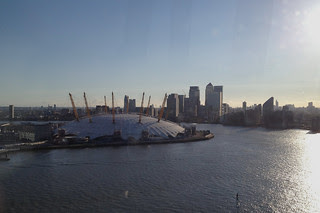 If you're heading from the Greenwich side, there's not an awful lot to see at the Royal Docks side, although the water was pretty enough in the sunshine, the only other attraction was a Londis... 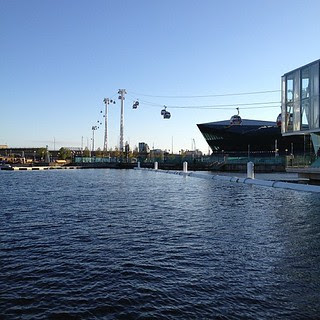 The stations themselves look rather nice with their glass and metalwork glinting in the evening sunshine, and there was even less of a queue on the north side of the river. 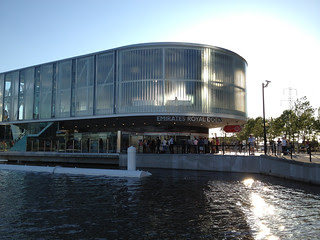 I didn't stick around for too long, choosing to head back for a second (expensive) trip. I was a bit more relaxed second time around, until the drop that greeted me as we descended into the station at Greenwich! 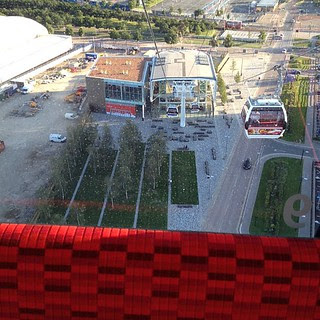 Apologies for the dirty windows - they clean them on the south side only ;-).

Once back on solid ground at Greenwich, I wandered round to have a look at the cars leaving the terminal - you can sit on benches right underneath them, and was struck by the sight of planes leaving City airport behind the cable car. I managed to snap this shot of one of them. 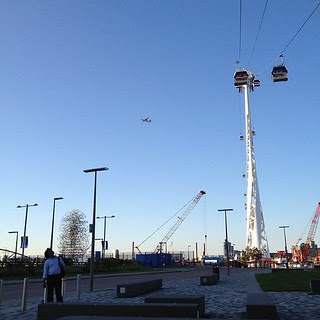 All in all I enjoyed my little trip on the cable car, but I couldn't see myself using it regularly, having no real need to go over to the Royal Docks, and the Greenwich peninsula not being massively accessible from Catford. It was also pretty expensive for public transport (£3.20 single, and although you can use your Oyster card, and it is £4.40 single if you don't), and doesn't count towards your daily Oyster cap either. It's cheap for a tourist attraction, but on the other hand the trip doesn't last long and apart from the dome/O2, the Shard (of course) and Crystal Palace transmitter, there's not a huge amount to see.

I was left wondering what the cable car is really for, especially as it has been rushed through so quickly. I guess the answer is it's just another one of Boris's madcap schemes, and one which we've had to pay (as taxpayers) quite a lot towards, despite the Emirates sponsorship that's plastered all over the place.

I'd be interested to hear what you think of it. The rest of my pictures can be viewed here.
Posted by Clare Griffiths at 8:43 pm 1 comment: