Trends in homicides in England and Wales: comparison of death registration and police report data

This paper was originally written by my former colleague, Cleo Rooney, and me for the WHO Family of International Classifications Network meeting held in Reykjavik on 24-30 October 2004. It used to be online at http://www.nordclass.uu.se/WHOFIC/papers/reykjavik84.pdf but that URL no longer works so I'm putting it online here so it isn't totally lost to the world!


Title: Trends in homicides in England and Wales: comparison of death registration and police report data
Authors: Cleone Rooney Clare Griffiths
Purpose: For information.
Recommendations: Further work is needed on improving the international comparability of vital statistics on homicide.
Abstract:
It is difficult to produce timely statistics on the annual number of deaths from assault from vital registration data. Full information about these deaths only becomes available after legal processes, which may take many months to complete. This can mean that these deaths are not registered in time to be included in annual statistics, or that they are registered before the cause of death is known.

In England and Wales, up to half the deaths eventually classified as assault (X85- Y09) may not appear as such in the original annual statistics. Deaths being investigated as homicide and registered before the cause can be certified fully are assigned a temporary underlying cause code of Y33.9 (E988.8 in ICD-9), and a manner of death code indicating that the verdict is still 'pending investigation'. These are identified as 'probable homicide /assault' in ONS mortality statistics, but not in WHO or EUROSTAT publications, which cannot accommodate such national departures from standard ICD coding and tabulation.

We have compared vital registration and police statistics from the Home Office to derive best estimates of numbers and patterns of deaths from homicide in England and Wales. Both data sources give similar pictures, and confirm that ONS figures on 'homicide and probable homicide' are consistent with statistics of deaths reported to the police / being investigated as homicide.

Work by the International Collaborative Effort on Injury Statistics(1) suggests that the quality and completeness of deaths registered as homicide may vary considerably between countries. Policy makers and pressure groups use these data for international comparisons. More work is needed to improve the comparability of these data and to educate users about these issues.

Introduction
In England and Wales, all suspicious deaths must be reported to the coroner for investigation before they can be registered.(2,3) If the police report that charges are to be brought against anyone in relation to the death or that the death is being investigated as homicide, the coroner adjourns the inquest to await the results of investigation and legal proceedings. Since 1978 it has been possible to register deaths at this point – known as accelerated registration.(4) ONS assigns a temporary underlying cause code of Y33.9 (E988.8) to these deaths. Since 1993, ONS has also coded coroner’s verdicts or 'manner of death'. These adjourned inquest deaths are assigned a code indicating that the verdict is 'pending investigation'. The coroner will normally update ONS with the final verdict and cause of death when these are known. This process can take months, or even years. This means that up to half the deaths eventually classified as homicide/assault (X85-Y09, E960-E969) may not appear as such in the original annual statistics.

For deaths since the beginning of January 1993, ONS updates the coding on its dynamic national mortality database when further information is received. Deaths on this database coded to Y33.9/E988.8 at any given time will include:

(a) deaths where an inquest has been adjourned as described above. Most of these will eventually be recoded on receipt of further information, and all but a few will be recoded either to homicide or to land transport accidents.

(b) a very small number of deaths registered after a completed inquest which delivered an 'open' verdict and a cause of death of injury or poisoning which could not be assigned to any more precise code. These deaths will retain the Y33.9/E988.8 code for underlying cause of death.

Methods of producing statistics on homicides
There are therefore several different ways of examining homicide trends in England and Wales,(5) using the number of deaths coded to:

2. X85-Y09, plus Y33.9 (E988.8). This takes account of accelerated registrations, as described above. This is a simple adjustment, which can be done using published figures by underlying cause, without requiring knowledge of the progress of inquest proceedings. It will include a handful of deaths which were probably not homicides, since the inquest verdict was 'open'.

3. X85-Y09, plus Y33.9 with a pending verdict. This allows more exactly for accelerated registrations which are likely to become coded to homicide.

[Note that in 2007 ONS changed the code it used for deaths where the inquest was adjourned to U50.9 in order reduce the possibility of confusion in suicide statistics. This means the best estimate of homicide deaths is now obtained by using X85-Y09 plus U50.9]

Comparison of ONS and Home Office data
Home Office (Justice Department) figures are based on the year in which the offence was first recorded by the police, which may not be the year that the death occurred or was registered. The initial number recorded for the year may subsequently be reduced as a result of decisions by the police or the courts that no offence of homicide took place.(6) Revised figures which take account of these changes are published regularly. 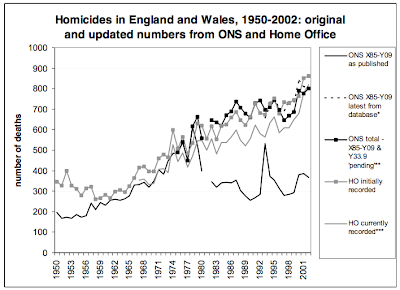 ONS deaths data are now tabulated by the year in which they occurred, so the figures cannot be matched exactly with Home Office data. However, they do show very similar patterns and trends since about 1960 (Figure 1). In the 1950s numbers from death registrations were considerably lower than homicides recorded by the Home Office, and may have been incomplete. The closest correspondence is between Home Office figures for deaths initially recorded as homicide, and ONS 'total' figure – that is the sum of deaths certified as homicide, and coded to X85-Y09 in time for routine annual publication and deaths certified after adjourned inquest coded to Y33.9.

Figure 1 also illustrates the variation which may occur in ONS annual figures due to differences in how long after the end of the data year the data are extracted and analysed. The number of deaths coded to homicide in the 1993 annual publication was among the highest ever, whereas the total including E988.8 'pending' was similar to other years in the early 1990s. The reason is that the annual extract for 1993 was taken 15 months later than usual, because of changes in ONS computer systems. By that time, ONS had received many more updates on accelerated registrations than would be usual.

Patterns of homicide in England and Wales 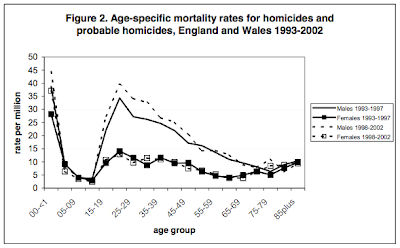 Death rates due to homicide are generally higher in males than in females, this difference being greatest in young adults. Rates among children and the elderly are more similar between males and females (Figure 2). The highest homicide rates in both sexes are in infants. Rates for young men have increased between 1993-1997 and 1998-2002, as have rates among infants of both sexes. In other age groups, rates have remained similar between the 2 time periods.

Comparison with European Union data
Table 1 shows a comparison of homicide rates in the EU15 countries from Key Data on Health 2002, based on annual published data. We have also added the England and Wales rate based on the best estimate of homicides described above. Clearly, the ranking changes considerably when corrected figures are used. England and Wales had the 6th highest rates in men and 5th highest in women, compared with the ranking for the UK on published data of 14th and last respectively. As Scotland and Northern Ireland have higher homicide rates than England and Wales, UK rates would show an even greater difference. However, this comparison ignores any differences in data from other countries. A recent study of the comparability of cause of death statistics in the European Union(7) found that death rates could vary substantially due to differences in certification practice and laws. This particularly applies to external causes of mortality, such as homicide and suicide, where legal definitions also come into play. 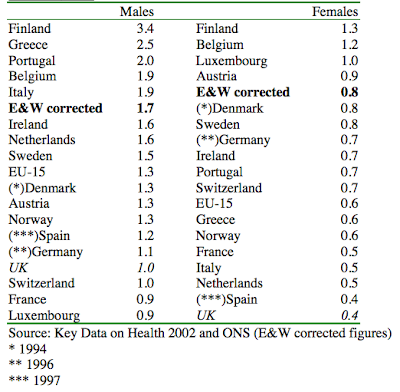 The need for better international comparisons
Work by the International Collaborative Effort on Injury Statistics suggests that the quality and completeness of deaths registered as homicide may vary considerably between countries. Comparisons of homicide rates in countries participating in the ICE(8) showed that rates in England and Wales were lower than those in Scotland, New Zealand, Israel, Australia and Canada even after including adjourned inquest deaths. They were higher than Denmark, the Netherlands, Norway and France. However, French death registration figures probably underestimate homicides and other injury deaths because INSERM does not have access to cause of death information on deaths subject to forensic investigation.(9) The directly age-standardised homicide rate in the USA was six and a half times that in England and Wales.

Policy makers and pressure groups use homicide data for international comparisons. More work is needed to improve the comparability of these data in international publications and to educate users about their use.

Posted by Clare Griffiths at 12:06 am