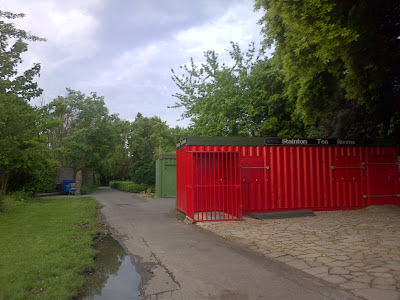 (As an aside to the cafe and community garden issues, sports changing rooms were also raised and a firm no was the answer. FA and Sport England League teams can't play official games at the park because of the lack of facilities- a toilet block and changing facilities. There is no money to build, maintain or staff a facility. Also discussed was the much delayed felling of some of the awful conifers around the bowling green. This may be brought forward in order to improve the look of the area, lift spirits, and discourage the vagrants who have apparently built shelters onsite.)
Posted by Clare Griffiths at 11:36 am

Im doing my best to spread the word about the cafe decision being made in the next couple of weeks.

Likely cafe investors, community groups looking to deliver a cafe or community garden need to hear about the opportunity.

This is crazy. The park is crying out for a reliable cafe and the benefits to the park of having a permanent, always open cafe are obvious. How do I make a bid?!

Hi David- you can email unsolicited bids to the Project Managers listed below.